You are here: Home / Flies / What Do Crane Flies Eat?

And they can be detrimental to your garden and yard.

So what do crane flies eat?

An adult crane fly doesn’t really feed on anything after reaching adulthood. They grow harmless during this stage and don’t possess any mouthparts to suck blood or eat with.

However, it is not the adult form, but the larval form of crane flies that can be considered as the real troublemaker. The larvae for crane flies are also known as leatherjackets and are a major threat to your garden and lawn.

Their larvae feed on the roots and stems just below the surface and can destroy your plantations and flowers.

So what does a crane fly actually eat?

Adult crane flies do not really feed on anything. Out of their four life stages, the larva is the only form where they eat and can pose a danger to your plantation.

The larva feeds on the roots of grass and other plantations. The larva is always able to find abundant sources of food while growing up because adult crane flies are careful to deposit their larvae in soil with moisture and healthy plantation around.

Your yards can be potential breeding grounds for crane flies because of their natural instinct to lay down their eggs in moisturized soil.

These crane flies usually inhabit areas around different states with mild summers and winters. The rainforests in the Pacific Northwest of the United States are also host to these.

Where are crane flies found?

From the tropical and equatorial regions to the sub-polar land, you will find these large flies buzzing almost everywhere.

However, the most common and perhaps the most damaging species of crane flies are found in North America under the name of the European crane fly. Crane flies have over 15,000 different species, and there’s a reason farmers and homeowners in America are dead tired of them. 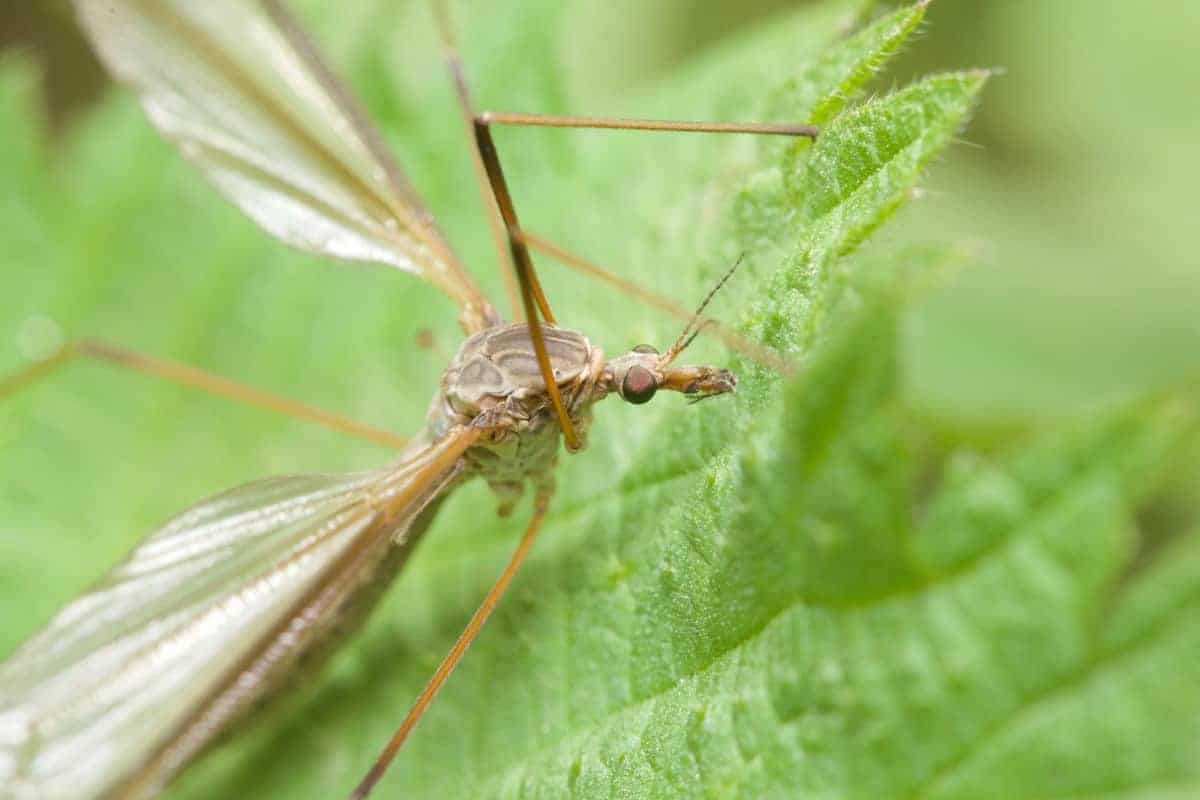 The European crane fly can resemble a mosquito in appearance. The wings and the upper body are shaped exactly like a mosquito’s, leading to the uncanny resemblance.

However, the lower body of a crane fly is generally much larger. The total wingspan of crane flies can be over 2.5 inches when measured.

Crane flies happen to be gray, brown, red, or yellow in color.

Female crane flies look more intimidating than the male crane fly because they have an ovipositor that deeply resembles a stinger on their back. However, this stinger doesn’t actually sting and is only used for laying eggs on the ground.

The confusion between crane flies and mosquitoes is owed to their size and shape. There is no other similarity between the two, as crane flies do not bite people and suck on their blood.

They might be called mosquito wasps and mosquito hawks in some places, but crane flies don’t prey on mosquitoes either.

The lifecycle of a typical crane fly depends on four different stages. These stages include the egg, the larval, the pupal, and the stage of adulthood.

Unlike some other flies, adult crane flies happen to have an extremely short-lived lifespan.

As soon as crane flies come out of their pupal stage, they indulge in laying eggs and mating. Males and females mate together to form new eggs.

As we already know, female crane flies have an ovipositor on their backs, which is used for storing and depositing eggs. The female crane fly then lays eggs around the soil in your yard or garden.

The eggs are black in color and are laid around water surfaces, in wet or dry land, or in algae.

A single female crane fly has the ability to lay over 2 to 300 eggs during its lifespan. The eggs hatch by themselves within a period of one to two weeks, after which the larvae are formed.

The larva looks like a legless worm, with a grayish-brown and cylindrical body. The larva has a body that tapers towards its head.

The body might also contain different welts, small spots, and other projections across its surface. The larvae can develop a sturdier outer covering in some species.

The larvae are known to be voracious eaters, which is why they feed on the stems and roots of your plants and vegetation. They can damage plants, leading to the need to get rid of them from your property.

The larval stage is perhaps the most dangerous of all crane fly stages for you. This is the only stage during which crane flies pose an immediate danger, and this happens to last the longest.

The larval stage can last from two weeks to over two months. Once the crane flies start pupating, they can turn into proper flies within 2 weeks’ time.

After this, adult crane flies live a relatively harmless life and mate with other crane flies to deposit and lay eggs. Their adult life is short-lived as they die within a few days after pupating.

Where do crane flies live?

Crane flies are typically found within moist and vegetative habitats. This leads us to understand what crane flies can be attracted to.

They are first attracted to water bodies, where they find good soil to lay their larvae. If water bodies aren’t available, they go for moist soil near your yard or garden to find a good spot to deposit their eggs.

This forms a chain where these flies eventually take over your property, with their larvae feeding on the stems and roots of your plants.

Some species of crane flies are also found hovering around streams, feeding on the small aquatic insects present near water bodies. They can also feed on decaying plants near the surface.

Why do I have crane flies?

As we know by now, crane flies like vegetative, moist, and outdoor habitats. They can be seen flying around your home, near window screens and external walls.

Some larvae can also eat invertebrates, small aquatic insects, and other decaying plants around streams. You have crane flies because of your yard or garden.

If you have a flourishing garden or yard, crane flies would be the first to frequent the place for their breeding grounds. The real damage begins once they lay eggs, which are transferred into a larva that feeds on your plant stems and roots.

Should you be worried about crane flies?

Well for starters, adult crane flies do not bite or sting pets, livestock, or humans. Unlike other mosquitoes or even horse flies, they do not pose damage to the living and moving forms of life around us.

However, the voracious nature of the larvae from crane flies can damage your grass and can create patches of uneven grass.

Hatched larvae can also cause damage to the roots and stems of your plants. Additionally, they attract raccoons, skunks, and birds, which might come and dig up your ground to feed on these crane flies.

To eliminate the dangers of a crane fly infestation, you should focus on the larvae rather than on the adult form. The larvae residing under the soil poses potential damage to your property and should be dealt with accordingly.

How to get rid of crane flies

Well, there are two potential ways to get rid of crane flies. The first is to use a potent insecticide for killing the flies in their most dangerous form; larva.

The insecticides would kill the larvae and would stop them from using your soil and plants as breeding grounds. Once the larvae are killed, you can stop the infestation, because adult crane flies do not live for that long.

Secondly, you can allow nature to play its role by inviting natural predators to come and pick on the larvae. You can invite birds by putting water and seeds in your yard.

Birds might come attracted by them but would soon recognize the gold mine of larvae on the soil. They will hence come and pick them up, eventually leading to a complete end to the infestation.